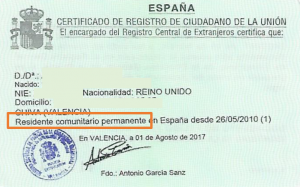 BRITISH expats aiming to be ‘Brexit Ready’ ahead of March next year are increasingly asking about their status as ‘permanent’ residents.

The current road show being staged by the British consulate team aims to answer personal questions over the UK leaving the European Union, a move scheduled for March 29, 2019, – although an agreed deal is likely to involve a transition period. However, there are a number of questions about whether the word ‘permanente’ – or ‘permanent’ – is needed on either the large green paper certificate or the smaller version. The Embassy has now provided us with a clear answer.

It is understood that the wording has evolved since teh certification was first introduced for expats seeking resident status and documents differ. A spokesman for the British Embassy in Madrid this week confirmed: ‘As long as you have a green residency card or certificate, you are on teh central register of EU nationals; which most people refer to as residencia. “These cards or certificate do not expire. You must, nowever ensure it shows your current address and update it in the events of your circumstances changing”

Want to join the discussion?
Feel free to contribute!

How do I register as a resident in Spain?